Why do your Machines Leak? 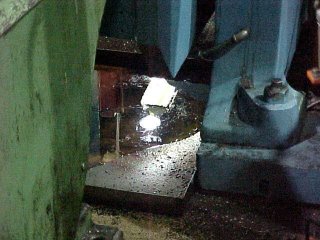 Or more importantly, why do you allow your machines to continue leaking?
Posted by Mike Wroblewski at 7:22 AM No comments: 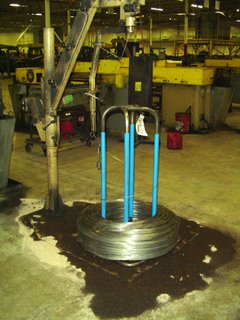 If you constantly drop oil dry or some other fluid absorbent supplies around your leaking equipment and it is starting to attract all the cats in the neighborhood, you might need a 5S program.
Posted by Mike Wroblewski at 11:39 AM No comments: 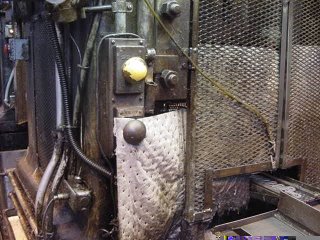 If you can't make out the red emergency stop button from the other buttons on a machine because it's colored dirt brown like the machine, you might need a 5S program.
Posted by Mike Wroblewski at 9:26 AM No comments:

A week ago, I worked on a kaizen event at a client site in Indiana. This kaizen event was not only successful but it had the best target goal of all, to bring work in-house that was currently being outsourced.

It seems lately that the current corporate direction is to chase the low labor dollars abroad to turn a quick improvement to the bottom line that will satisfy the Wall Street crowd. This kaizen project took the lean approach of increasing product velocity in-house first.

In one week, we opened up over 25% of the floor space (over 3,000 sq feet) by reducing and standardizing the work in process along with re-aligning the machines in the department to match the product flow. The product velocity in the department went from 5 days to 1-2 days depending on product complexity. Finally, the existing MRP system has tweaked to respond daily to the changing requirements. Yes, we are still going with a MRP based system (Got to learn to walk before we run). A few kaizen newspaper items were recorded as homework items that required additional work before the new process is 100% on-line however the team has a great action plan to succeed. All done without adding a single new employee. For the customer, our turnaround time went from a 3 week leadtime with the outsourced product to under 1 week with the work in-house.

What a great reason to form a kaizen team, bring the work in-house!
Posted by Mike Wroblewski at 9:24 PM No comments:

"Time waste differs from material waste in that there can be no salvage. The easiest of all wastes, and the hardest to correct, is the waste of time, because wasted time does not litter the floor like wasted material." Henry Ford, Today and Tomorrow, 1926.
Posted by Mike Wroblewski at 3:06 PM 1 comment:

5S Footprints on the Manufacturing Floor 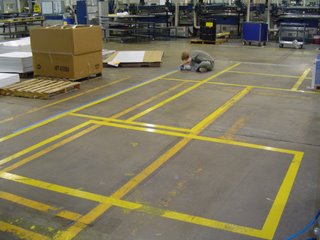 I spent yesterday at a client's manufacturing plant conducting a 5S Day. The 5S stands for Sort, Straighten, Shine, Standardize and Sustain to create an organized, clean and productive workspace. This 5S day was held on a Saturday when normal production was not scheduled to run allowing the team to focus on the target area and not disrupt daily production. We started the day with a quick 1 hour 5S training session followed by working in the target area on the first 3 S of Sort, Straighten and Shine. Our 5S team included members of their management, associates and even temporary help working side-by-side to transform our target area from one of typical chaos to organized flow.

One of the dilemmas facing the team was how to improve the manufacturing floor. As shown in the picture above, this area has falling into a multiple footprint trap. Since this company began their lean journey just last fall, they eagerly jumped into it with both feet. Over the course of about eight months, They have already completing over 20 kaizens throughout the plant. Our target area changed several times from previous kaizen activities causing footprints to change and increase in numbers. The problem is that the majority of the footprints were painted on the floor and old ones were never eliminated.

The purpose of footprints is to designate a home location. As you kaizen an area, if outdated footprints remain on the floor and new ones go in, all you get is confusion. I was told that it too much trouble to remove the old footprints.

Not to let a little paint create further confusion, I took a small group aside to tackle the issue. The shop floor was a typical concrete floor, unpainted but sealed. The painted lines criss-crossed the floor with several coats of paint. Our first attempts to scrap up the paint were painfully slow and not very effective. I quickly realized why they previously gave up. Our second attempt called for stronger action. We pouring a combination heavy duty paint thinner on the lines plus aggressive hand scraping. It worked however it still was not the fastest job of the day. After lots of elbow grease, the old footprints were eliminated.

The team members discussed the line issue trying to decide if paint or tape was the best solution for the future. Paint is more durable but more difficult to change for future kaizens. Tape is very flexible for change but wears out quicker. With some debating, the team arrived at a unified solution to go with floor tape. With the certainty of future kaizens, tape is the most flexible option. To help us sustain the improvements, monitoring and replacing the floor tape as needed was added to the walk through 5S evaluation form as a special item.
Posted by Mike Wroblewski at 9:34 AM 9 comments: