I have several conferences and engagements on my schedule this year to share lean experiences and lessons. The next up is the AMExpo held in Charlotte, NC on March 11-12, 2009 where I'll participate in a roundtable discussion on creating and sustaining a continuous improvement culture. Please attend our session if you can make it to the conference.
Posted by Mike Wroblewski at 12:07 PM No comments:

One of my favorite sources on leadership skills, Dale Carnegie, a master of the positive, wrote timeless principles on influence and leadership in his famous book, “How to Win Friends and Influence People”. Although Mr. Carnegie died in 1955, his legacy continues through his work which is just as relevant today as when first written in 1936.

Here is an excerpt from his book.

Criticism is futile because it puts a person on the defensive and usually makes him strive to justify himself. Criticism is dangerous, because it wounds a person’s precious pride, hurts his sense of importance and arouses resentment.

Benjamin Franklin, tactless in his youth, became so diplomatic, so adroit at handling people, that he was made American ambassador to France. The secret to his success? “I will speak ill of no man,” he said, “and speak all the good I know of everybody.” Any fool can criticize, condemn and complain. But it takes character and self-control to be understanding and forgiving.”

“Don’t point out when people are wrong. Respect differing viewpoints.”

“When you are wrong, admit it emphatically and move on.”

“You will get more in business with honey than vinegar. Be friendly and gentle.”

“Let the other person talk more than you do. Listen fully.”

“Lead people to the conclusion you want by making suggestions, but ultimately let a person feel the idea was his or hers.”

“Use questions to lead people instead of giving direct orders.”

“Be supportive and make mistakes seem easy to correct.”

“See the best in people and then they will rise to your expectation.”

According to Gary Convis, a piece of key leadership advice was given to him by Kan Higashi (Both were senior NUMMI leaders), “lead the organization as if you have no power.”

The ability to influence is one of the core skills we need to master on our lean journey.
Posted by Mike Wroblewski at 7:06 PM No comments:

John Shook and the Socrates Method

Here is an outstanding article on coaching and questions by John Shook in teaching the Socrates way. As a lean teacher, corporate executive and father of two, it is an extremely difficult path to follow, much less master.

Unfortunately, patience for the Socrates methodology is not a common luxury in today’s corporate environment. Indeed, an unfortunate reality.
Posted by Mike Wroblewski at 4:46 PM 4 comments: 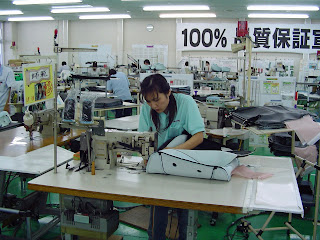 Here is a quick manufacturing exercise for you to do today. Walk out to your gemba and ask these questions:

Does this look more like a storage facility or a production site?
Do I see more material than I see associates?
Can I see all the associates in the area from here?
How much material can one associate work on at one given time?
What is the right amount of inventory required?
What is the math behind determining the “right amount” of inventory?
How often are your inventory levels (part by part) reviewed and re-calculated?
Can you tell at a glance (not looking at a computer spreadsheet) if you have more or less inventory on hand than required?

If you don’t know the answers, maybe this is one area to explore for kaizen.

After re-watching some of my JKE video tapes from my lean benchmarking trip to Japan hosted by Gemba Research, it is quickly apparent that the line side inventory quantities I see in the United States plants are significantly higher than at the leaner facilities I visited in Japan.

Baking Instructions
1. Preheat oven to 350 degrees (Use broil setting if need quickly).
2. In a large bowl, mix all ingredients in any order but it is recommended to add the value stream maps first to provide a solid dough base.
3. Beat all until a well blended, smooth mix.
Note: You may have to remove harden parts that do not blend easy.
4. Bake 2 -3 years or until rising to world class level.
5. Check often to prevent burning.
6. Let stand on cooling rack before eating.

Important Disclaimer: Following all these instructions does not guarantee the end result will look anything like what is pictured on the box.

Reviews
4 Stars -“I know this will sound a bit like a cliché, but I have been looking for a good lean transformation recipe my whole manufacturing career. I never imagined that I would find the perfect recipe until I tried this recipe. The company turned out crisp and lean with just right amount of filling, not a drop of waste. I will hand down this recipe for generations of management to come.”

1 Star -“Awful recipe. My first batch failed to rise and left a lingering, bad taste in my mouth. The trick may be to make sure the dough is well mixed with no concrete like, hard parts remaining. If the batch is not mixed with the right amount of ingredients, the batch easily crumbles and falls apart.”

Wouldn’t it be nice if there was an easy recipe like this for our lean transformation?
Posted by Mike Wroblewski at 9:26 PM 6 comments:

Are you Passionate about Lean?

What do I mean by passion? After my lean presentation at our PB & J at Personix, the management team awarded me their P.A.C. T. Passion Award which is their way of promoting and recognizing this valued behavior. PACT stands for Passion, Accountability, Courage and Transparency which are the primary behaviors promoted at Personix. What a cool award idea and an honor to be included as among the passionate. On the plaque, part of what is written about passion:

“Possesses a strong desire to achieve goals with a resourcefulness, tenacity and enthusiasm that inspires others.

If I were more Passionate today, I would…

This is a great list to help guide our daily action and reflect on our behavior. Think about it this way.

Would you prefer to work next to a passionate person or someone devoid of passion in their work?

Look around our company, can we tell who is passionate and who is not? What would our company look like and feel like if we all have passion? What could we achieve as a company? Would there be anything we could not achieve?

Do we hire passionate people? Do we promote and reward people with passion?

Do you have passion?

Awhile back, I was invited to present a lean topic to the management team at Personix in Indianapolis, Indiana during their monthly PB & J. I love to promote the lean approach and share improvement ideas so I was happy to attend today’s lunch meeting. However I had to ask first, what was PB & J?

For those that don’t know like me, PB & J stands for Peanut Butter and Jelly. Each month, the staff hosts a business learning lunch session with a buffet line set up to make your own peanut butter and jelly sandwiches. (They assured me that the peanut butter was safe!)

During the lunch, different topics are presented and discussed. It could be a book review, a lean tool, a lean concept, or whatever learning topic is of interest to the group. What a simple, easy and fun concept!

I was asked to run through my Japan Kaikaku Experience from my lean study mission hosted by Gemba Research. A couple of the lean leaders at Personix had previously seen my presentation and wanted the rest of their group to see it. It was just a quick snapshot of the lean lessons I learned from my trip which I have posted in the past.

If you wish to completely immerse yourself in seeing lean in action in a truly transformational professional experience, this trip is for you!

Personix, a wholly owned business units of FISERV, Inc., has been working on their lean journey for several years now with excellent success. Personix delivers solutions for card, print/mail and electronic document delivery. They began as a plastic card personalization company and have expanded into other custom documents like benefits explanation, consolidated statements, tax documents, etc. Personix personalizes more than 875 million document images and 125 million cards per year.

The session interest was high and several topics generated great discussion like stand up desk in the office. Based on this discussion during today’s PB & J, I am confident that the Personix team will continue looking for ways to continuously improve!
Posted by Mike Wroblewski at 6:11 PM No comments:

I stumbled across a cool example of a hospital poka yoke dealing with the persistent issue of lack of hand washing. At MetroWest Medical Center in Framingham, Massachusetts, Lean Process Manager Kevin Frieswick has developed a hand wash poka yoke using “Radio Shack and Home Depot parts”. They also post a great clip that shows this device in action, but you have the see the heart monitor portion before getting to the hand washing toll gate.

I salute Kevin with a clean hand for his creativity before capital!
Posted by Mike Wroblewski at 9:57 AM 4 comments: