Wisdom of the Week

A Native American elder once described his own inner struggles in this manner.

“Inside of me there are two dogs. One of the dogs is mean and evil. The other dog is good. The mean dog fights the good dog all the time.”

When asked which dog wins, he reflected for a moment and replied, “The one I feed the most.”
Posted by Mike Wroblewski at 11:24 AM 1 comment:

Whaddaya Mean I Gotta Be Lean? 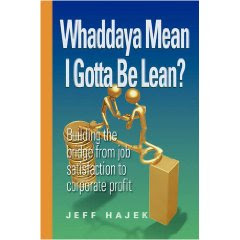 I just finished reading an excellent, new book written by Jeff Hajek, “Whaddaya Mean I Gotta Be Lean? Building the bridge from job satisfaction to corporate profit”. Most business books are written for executives and managers which makes Jeff’s book unique in that it seems to be written more for team leaders and team members. This book provides an excellent format to answer many questions that people have at the start of a lean journey beginning with what’s in it for me.
Chapter 4 on “What is lean?” is one of the best overall descussions of lean I have read in quite some time for those wanting to understand the basic concepts without adding details that only end up confusing people.
Chapters 8 and 9 are filled with outstanding, useful answers to real problems or situations on the lean journey with suggested actions that are spot on. I especially loved Jeff’s positive responses to each of the problems that help bridge the conflicts that might become obstacles to success.
Even the experienced lean practitioner can learn from these examples to improve their coaching and influence skills.
Nice job Jeff on providing so much valuable information on the human side of implementing continuous improvement all in one book.
Jeff Hajek the founder of Velaction Continuous Improvement, LLC. Please visit his website at http://www.velaction.com/ for more information.
Posted by Mike Wroblewski at 6:28 PM 1 comment:

Get Your Boots On!

At the Printing Industries of America Lean Conference in Lexington, Kentucky a couple of weeks ago, I learned a new saying, “Get your boots on!” According to Mike Hoseus, co-author of The Toyota Culture and former Toyota-Georgetown (TMMK) manager, this is how “Genchi Genbutsu” is affectionately known by among the team members at TMMK.

During the morning session on “Building and Sustaining a Lean Culture: The Quality People Value Stream” presented by Mike Hoseus, currently Executive Director of the Center for Quality People and Organizations, a little more about the Toyota Culture was revealed. One of the first points is that culture starts with values and beliefs which drive our behavior. Toyota places critical emphasis in establishing its values and beliefs as the foundation of its culture. Another key point was the alignment of company goals and employees’ goals under a common purpose of long term mutual prosperity.

One of his examples to describe our actions to a goal was weight loss. Suppose we want to lose 25 lbs. Which courses of action do we pursue? Do we buy a digital scale, set up a process to take daily measurements and chart the results on a computer program and call it part of our visual management system? Or do we set up a daily exercise process with a diet program?

Mike also emphasized providing an environment to think and establishing a culture to make problems visible. All the lean tools are primarily focused on making problems visible. We must learn to admit to having a problem and commit ourselves to solving the problem. Mike told us that at TMMK over 6,000 andon pulls occur daily that make problems visible. Even with this incredible number of andon pulls, the line only stops about 7% of the day (93% uptime). The 6,000 daily problems are overwhelming to say the least. When asked how does Toyota go about solving all these problems and Mike simple said “one at a time.”

Standards were another key topic of discussion. Without standards, there is no problem. The first question should be, what is our standard? Followed by, does everyone see the problem? And, what are we going to do about it?

In summary, Mike Hoseus stated that connecting the product and people value streams is the key. Lean can only be effective with both and Lean can’t be sustained without both. At Toyota, they believe that their competitive advantage is people and problem solving.

So what values and beliefs do we need to start with to drive our lean culture? Maybe we can start with this: Another problem? Life is good! Let’s get our boots on!
Posted by Mike Wroblewski at 9:09 PM No comments: 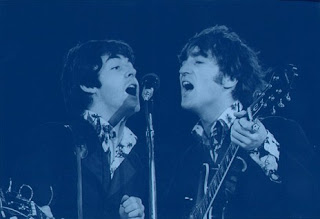 These are great examples of synergy. Each is extremely talented individually but put them together and WOW! It is a thing of beauty, pure magic. Just stand back and prepare ourselves to be amazed by the result.

Synergy is the interaction of two or more forces so that their combined effect is greater than the sum of their individual effects, or simply put where 1 + 1 = 3.

In a true lean system, there are several synergies.

You may recognize the first two as the pillars to the Toyota Production System (TPS) and pillars to the Toyota way. Taiichi Ohno uses an analogy in explaining the relationship between the two pillars of the Toyota System in his book, Toyota Production System, “A championship team combines good teamwork with individual skill. Likewise, a production line where just-in-time and autonomation work together is stronger that other lines. It is in the synergy of these two factors.”

Each is worthy on its own however working together the resulting effect is far greater. Many companies make the mistake of concentrating on just one aspect of lean, or in using some of the tools, or narrowly focusing on only one of the pillars on their lean journey. Some improvements can be gained but this is not REAL lean and there is no WOW. Only by combining these components in a total business system is when lean synergy is realized.

It seems like just “yesterday”, we started traveling down “the long and winding road” of our lean journey. It is a constant struggle to become lean, nothing short of a true “revolution” is needed. We put in many “ a hard day’s night” to get where we are today. At first our associates told us to “let it be”, and there were many crisis moments of uncertainty when we need “Help!” from our lean sensei and would cry out “Hey Jude”. Our lean sensei would only respond by saying “Tell me what you see”.

With the power of synergy, one day it will all “come together”, but we know that we are “getting better” everyday. One day maybe waste will be “nowhere man” and we can shout “Ob-La-Di, Ob-La-Da”. Just “imagine”.
Posted by Mike Wroblewski at 5:13 PM 1 comment: 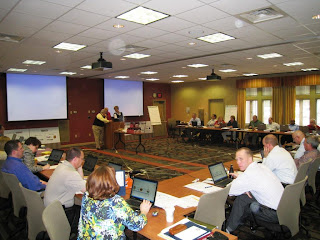 During our Logistics District Managers meeting this week, we incorporated the Root Beer Game into our lean training session. The root beer game is a supply chain management simulation game hosted online by Harvard Business School derived from the classic “Beer Game” originally created by MIT in the 1960’s.

With this computer simulation game, we broke into teams of four and assigned each member a role of retailer, wholesaler, distributor and factory. Each role had the mission of satisfy their customer demand while keeping cost at a minimum which was measured by inventory carrying costs. In our session we simulated 40 weeks of production to see the effect. The total time to run the simulation, report out and discuss key learning took almost 3 hours.

The main focus of the simulation is to demonstrate oscillation in the supply chain and how variability increases up the chain which is described as the “bull whip” effect. Discussion also includes the effects of forecasting, lead time, information flow, batching, impact of promotions and uncertainty.

It was pretty cool watching the reaction of the teams and individual responses as the game progressed. Some of the comments heard included:

“Oh, what an idiot!” (Gently reminders to the group of respect for people and the no-blame culture aspect of lean were needed.)

“We didn’t buy that ERP module.”

“We used the roll-the-dice strategy.”

Overall, it was a great learning experience for all. It does require a license based on the number of participants which cost $37.50 per license. We also need a bit of help from our IT staff to link the computers together and connect to the Harvard server during our allotted time window, but it was not a major problem. If you are looking for a good supply chain game as a teaching aid, this one does an excellent job.
For another write up on their beer game experience, check out the great post by Pete Abilla at Shmula called The Bullwhip Effect.
Posted by Mike Wroblewski at 9:18 PM 4 comments: