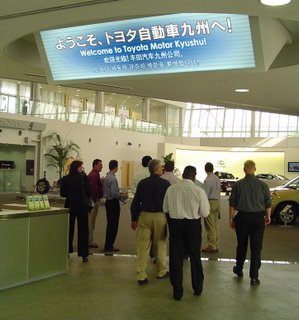 On our first manufacturing tour day in Japan, we wasted little time and proceeded directly to the pinnacle of lean manufacturing in the world, the Toyota Motor Company. After many years of reading, hearing and studying about Toyota with their successful Toyota Production System, I find myself standing today in the newest Toyota plant in Japan. My first impression is "WOW, these guys are REALLY good and they make manufacturing look easy."

The Toyota Motor Kyushu plant was built in 1991 and is one of 15 Toyota plant in Japan. This plant makes several different models including the Lexus IS 350, Lexus ES 350, Lexus RX 350, Harrier Hybrid and the Kluger (Highlander). Approximately 1,784 vehicles are produced per day for a Takt time of 60 seconds per vehicle with planned overtime currently in the schedule. The workforce is about 6,500 employees (almost double from a year ago!) . The percentage full time permanent employees to temporary employees is split even at 50%-50%.

The operations on site, performed in several buildings, include pressroom, welding, paint, assembly and inspection. The welding building contains 480 computerized robots hitting over 5,000 hit points (spot welds) on average per vehicle. All the doors, lids, hoods, etc are removed after the paint process, then re-fastened in assembly for easier access during assembly. The entire plant is air-conditioned for climate control. A total of over 2,800 different components are assembled on the painted bodies.

The assembly operation is divided between two buildings, the Lexus line in one and the Harrier/Kluger models in the other. The Lexus building was not open for tours for some "top secret" reason so our access was limited to the Harrier/Kluger line. In this building, all the models were run across a single assembly line with the line woven back and forth 11 times. Each of the 11 sections of assembly line is about 100 meters long and run independent of each other with a 5 car buffer between them. This buffer was a employee suggestion to keep portions of the assembly line running when one section was having a problem. A key example of Standard Work in Process.

Another implemented employee suggestion was a seat for the assembler working inside the vehicle called a "Rakuraku Seat". This seat moved with the conveyor line, with some stock bins attached, allowing the operator to swing inside the interior of the vehicle to perform their tasks then swing out while seated. It reminded me of those baby walkers as the operator propelled themselves down the line with their feet while sitting on the seat.

During our tour, assembly operators on several occasions pulled the stop cord on the assembly line due to a problem. In a matter of seconds, the floater for that area rushed over to the problem site. If the problem could be resolved in the remaining takt time, the line was started up again. Otherwise, the team leader was called in to help. If the problem could not be solved in 2 Takt Time cycles, the Line Leader was called in to help. At each level, the question was a simple matter of what degree was the problem, promoting quick response.

An interesting point is that the assembly line had a goal of only 97% uptime. They did not want 100%. It was believed that a goal of 97% was better (more realistic) and prevented quality problems from being slipped through. If the goal is 100%, the employees would say that something was not really a problem and let it go to keep at a target of 100%. With a target of 97%, the employees would not be pressured to let things go and stop the line to correct the problem!

The floater was the pivital position on the assembly line. This person's span covered about 4-5 line operators and performed tasks ranging from filling up bins (waterspider role), quick quality double checks, first responder to line problems from pulling the stop, absentee coverage, relief for line operators, etc. From my observation, this is a key role in the successful flow of Toyota's assembly line.

Another observation is the general material flow. I saw operators performing ONLY assembly tasks while the material handlers moved parts. With the Kanban card system and material coming in on multiple carts, it was like a well choreographed dance. Toyota made it look simple using only about a 1/2 day of inventory on the line. Except for the receiving and between buildings, there were no fork trucks handling material in the assembly plant. Electric carts pulled the material around the assembly line on flat bed carts. I saw as many as 5 material carts hooked together and pulled by one electric cart.

Overall, the flow of operations appeared well planned, very organized and made to look simple. For visual management, there were plenty of floor marks, small signs and other signals mainly dealing with material. Even the visual mangement was simple and did not clutter the walls or overtake the plant floor. With the number of line stops I saw today, it was apparient that Toyota is not perfectly run. I did not expect to see perfection today but Toyota comes very close.
Posted by Mike Wroblewski at 7:52 AM

"With the number of line stops I saw today, it was apparient that Toyota is not perfectly run."

Thanks so much for sharing your experiences, Mike. This is great advertising for the Gemba tours.

In the quote above, I'll respecfully disagree. The fact that the line stops and the sounds are always going means that Toyota IS well run.

Badly run companies pressure people into NOT stopping the line, pushing quantity over quality, band aids over root cause fixing, hiding problems over exposing them.

Nobody is perfect, we're all human. Toyota seems to recognize that much better than most companies.

Maybe we need to ask Gemba to organize an American lean gemba trip around the country? This tour could include any of the Toyota plants in the U.S. I'm especially curious to see what you learn from non-Toyota companies.

Thanks Mark. I did not mean perfect translated as well run from a lean point of view. Toyota is extremely well run. My intended point is that even Toyota has room for improvement and experiences day to day challenges (even encourages line stoppages and does not wish to hide problems hence the 97% uptime goal). Even with these problems, they react 1,000 times better than most companies. On the US Lean tour subject, this is currently being developed. If you are interested (or others reading this blog), please let me know and I will pass on the details in the future.

As a member of Toyota's North American Operations Strategy team, I had the privilege to visit Toyota Motor Kyushu (TMK) in February, 2003.

Quite simply, I found TMK to be one of the most impressive, well-managed factories I've ever seen.

The workforce was incredibly motivated, and the power of their simple, low-cost suggestions were visible everywhere.

50% of their hourly workforce was female -- a HUGE difference from any other Toyota plants in Japan. It was refreshing to see this example of diversity in Japan.

The plant itself was unusually quiet, even for a Toyota factory, with a natural lighting system that was a stark contrast to even the most well-lit Toyota factories I had seen.

Also, the physical surroundings of the plant were designed to be environmentally-friendly, so the plant blended into the surrounding landscape and exuded a Zen-like quality that is hard to find at any manufacturing site.

One secret to their success might be the fact that TMK started as a separate, contract mfg. company (known a "body maker" within Toyota).

Even after Toyota absorbed TMK back into the mothership, they continued to maintain a strong entrepreneurial sense.

As part of their "BT2" (Break Through Toyota) initiative, Toyota set a 3-year goal to reduce fixed costs by 30%, in order to improve cost competitiveness of their Japanese plants vs. China.

Their Motomachi plant had benchmarked TMK to derive targets that would allow them to achieve this aggressive goal.

So TMK was a source of learning even within the highly accomplished Toyota network of factories in Japan.

I vividly remember walking the bodyweld line, and being awed at every andon (visual control) board on the line reading "99.9%" uptime.

It was a powerful message. Admittedly, it was early in the day, and all plants have problems, but it was an indicator of what a motivated team with great management systems can accomplish.

My amazement only continued to increase, as we came across a visual control board on the recent launch of the then-new Harrier / RX300 (483N).

The chart showed that, while running the old Highlander model at full volume on the same line, TMK launched an all-new vehicle and ramped it from Quality Confirmation Stage (QCS) to mass production (steady-state) volume in just eight (8) days!

Our team marveled at this level of excellence, and when we commented on how Toyota's North American plants could not ramp a new model so quickly, we were told that even other Toyota plants in Japan could not match this ramp so quickly!

What differentiated TMK from other Toyota plants was the visible enthusiasm for continuous improvement -- we called it "Kaizen Spirit".

The workforce at that plant is a competitive weapon and the plant's management harnesses the power of ideas in a way that I've never seen before.

The last point I want to emphasize is quality. Only a handful of processes were flagged as a special, "Lexus quality" step (similar to a critical safety or quality check in any plant).

There was NO discernible difference between the manufacturing processes for Lexus RX 300 / Harrier (Asia version) and Highlander, and Kruger (Asia version) -- and not just because these vehicles shared many, common parts.

To me, it was about the high quality standards that pervade all Toyota plants in Japan. They don't differentiate between high- or low-margin vehicles in manufacturing.

Bottom line -- TMK is one of the best factories in the world, and anyone who has the opportunity to visit should do so!