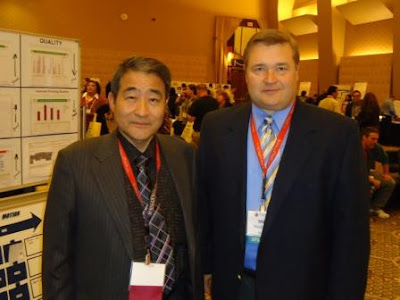 A personal highlight for me at the 2010 Northeast Shingo Prize Conference this week was the opening keynote speech and the opportunity to learn from Mr. Ritsuo Shingo, President of the Institute of Management Improvement and son of lean genius, Shigeo Shingo. I was overjoyed getting the chance to meet him after his keynote and talk with him about lean thinking including sharing with him my first lean lessons taught directly by his father back in 1985.

Mr. Ritsuo Shingo lean leadership experience is vast in his own right, working 34 years for Toyota in various positions eventually becoming President of Toyota China in 1998. After Toyota, he worked for Hino Motors China and was elected President in 2007. Mr. Shingo recently retired from Hino Motors in 2009 only to take up his father’s quest to teach lean with the Institute of Management Improvement.

One of his major keynote points was on the principle of “Go and See”. He said it was not enough just to go and see rather we should “Go and Watch.” Go and See may imply just taking a factory tour much like a tourist walks around to see the sights. Go and Watch stresses the idea of going to gemba with a purpose, staying in one area for a length of time. The process itself will tell you what is wrong with it, if any. Mr Shingo suggested that every management person should go to gemba at least once everyday, and stay in one spot for at least 30 minutes to observe. This is EVERY person in management, not just the plant production leaders. Can you imagine the impact if just this one behavior became part of our company’s culture?

Another point linked to Go and Watch was the steps to problem solving. Many of us know the steps in one form or another, but he stated them in this order:
1. Grasp Facts
2. Find the Problem
3. Cause Analysis-5 Whys
4. Countermeasure (Both temporary and permanent)
5. Implementation

Mr. Shingo went on to explain that his definition of a problem is a deviation from a standard. Without a standard, we will not be able to find the problem. He stressed that it is a management problem by not showing what is the standard. How many of us have clearly established standards? Standards are one of the foundations of a lean system yet for many of us, if we were to be honest, might find that we have a weak foundation.
If we have them, are we following them?
If we are following them, are we improving them?

Perhaps we should Go and Watch.
Posted by Mike Wroblewski at 1:20 PM