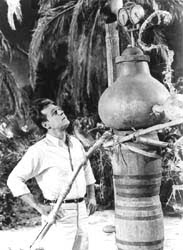 For those of you unfamiliar with classic American TV shows, between 1964-1967, a popular comedy show called “Gilligan’s Island” aired. The show’s plot was simple. Seven people from different spectrums of life go on a three hour tour by boat, ending up stranded on an uncharted desert island when the boat runs aground during a sudden storm. The castaways were Gillian (the ship’s mate), the Skipper, the Millionaire and his wife, a movie star, the Professor and Mary Ann.

Most of the episodes dealt with wacky attempts to get rescued that always ending up in failure. Other episodes just concentrated on issues and interactions between the castaways. Sound familiar? Don’t confuse this show plot with the current TV show “LOST”, which is more a drama and mystery. Gilligan’s Island was just plain silly.

I grew up watching this show in the later years and catching it on re-runs. I found the show funny however it was all the amazing gadgets that caught my attention. Despite the limited resources on this deserted island, the Professor always managed to build cool gadgets out of the materials found lying around, like coconuts and bamboo. What great examples of creativity before capital thinking!

Here is a short list of a few of those miraculous inventions made from mainly coconuts and bamboo:

In addition to these machines, the Professor was a “brilliant” chemist that Eli Lilly would love to call their own. He concocted some pretty wild potions, antidotes and extracts to make jet pack fuel, spider cider, shark replant and even nitroglycerine.

That covers the coconuts and the bamboo but what about pedal power? Well, guess what handy resource was available on the island for power? Human power. It was common to see Gillian, the Skipper or even one of the other castaways pedaling away on a stationary bike type contraption to operate fans, washing machines, water pumps or even a telegraph.

Unfortunately, the castaways did not understand the concept of policy deployment so all this ingenuity was not focused on more important projects like say fixing the hole in the boat or building a raft. Too bad Tom Hanks was not one of the castaways.

Overlooking the fact that Gilligan’s Island was only a make believe TV show, they same spirit of innovation and imagination on the show can be seen in real life. Take for example, a 39-foot tall windmill generating power to run 10 6-watt light bulbs, a TV set and a radio was built from blue-gum trees and bicycle parts by an ingenious 20 year old in Masitala, Malawi. Or for example, a team of students at the Massachusetts Institute of Technology devised a creative way to power a supercomputer for 20 minutes by pedaling a stationary bicycle hooked to a generator.

And then there is the first ever Innovate or Die Pedal Powered Machine contest where participants are challenged to create a pedal-powered solution for offsetting climate change. Over 102 Earth cooling inventions were submitted. Check out the video on the grand prize winner, the Aquaduct: Mobile Filtration Vehicle.

Maybe the castaways on Gilligan’s island were really on to something with their gadgets?
Posted by Mike Wroblewski at 5:57 PM