The Game of Rock-Paper-Scissors 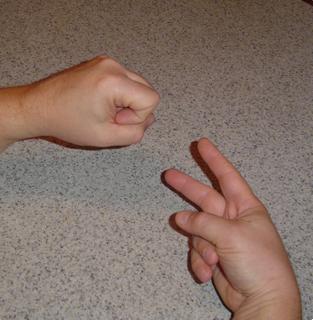 Did you ever play Rock-Paper-Scissors as a kid?

When I was a kid, this was the ultimate decision maker. Whenever we faced an important decision, like who goes first or who gets to decide what we are going to play next, we played rock-paper-scissors.

Normally, after a count of three, you threw out your hand in the form of either a fist, flat hand or extending two fingers. The paper covered the rock, the scissors cut the paper and the rock smashes the scissors. Each had an equal chance of coming out on top, making the decision.

In the grownup business world, we play a similar game when it comes to making most of our decisions. I call this game opinion-data-perception.

Traditionally, we gather around a table for a meeting and instead of throwing out our hands, we throw our our opinions, data and perceptions. The data covers the opinion, the perceptions cut the data and the opinions smashes the perceptions. Each has an equal chance of coming out on top, making the decision.

So how do you win at this game? Better stated, how can we make better decisions?

Well, if you added people to the meeting, you would get more opinions. You know the saying....everyone has one. But this would complicate the issue and pull us away from making a better decision.

If you provided more data, data would be king. Personally, as an ex-Industrial Engineer, I like this one. Data Rules! However, I have learned the hard way that perception is too powerful of a force for data alone. Especially if the perception is formed at the top of the organizational chart. Besides, adding more data just confuses most people to the point that their eyes start to glaze over and their minds become numb.

So what is the answer?

Perception by gemba. To make better decisions, go beyond the data by going to the gemba!

Go to where the work takes place yourself. See the issues with your own eyes, not just what it says on paper in a report or chart. Touch the problem, hear what the people next to the problem have to say. Use all your senses to develop an improved perception of the problem.

With this knowledge, only then can we make better decisions in our grownup game of rock-paper-scissors.
Posted by Mike Wroblewski at 10:26 PM

You make a good point as to how decisions can be made in the business world. In my "opinion" (ha-ha!), for the 20+ years of my experience in manufacturing and operations, it seems to me that “perception” wins out more often than the other two. “Opinions” can be discounted (unless it is from the guy who signs my paycheck) and the right data can be hard to come by or to understand. I have found that it is so much easier to solve a problem/improve a process by becoming familiar with the process at where it happens on the floor (go to Gemba). And, just ask the right people. The people who are directly involved in the process always provide much more insight as to how to fix/improve it than the head honchos in the corporate office. Your blog makes a very good point.

Thanks for your insight on this point. Everything becomes clear with experience and knowledge gained from going to gemba. You are on the right track for creating improvement!